Welcome to
Chiesi group
Home > News > The way towards a sustainable and resilient...

The way towards a sustainable and resilient healthcare

The collaboration among governments and the pharmaceutical industry has the power to deliver outcomes to patients at first, but also to society and economy. Therefore, pharma companies should be considered as a catalyst towards a sustainable and resilient healthcare system, following patient-centered approaches and demonstrating social responsibility.

Investing in the ecological transition of the pharmaceutical industry provides a starting point to build a healthier and more sustainable future. For 30 years, the French Chiesi’s industrial site of La Chaussée Saint-Victor (near Blois, in Centre Val-de-Loire Region) has successfully met all industrial and technological challenges, becoming a strategic site for the company and a model of sustainability: zero emissions and no discharges into the air and water. Moreover, the company is investing to become by 2025 the leading producer of Metered-Dose Inhalers (MDIs) with minimal carbon footprint.

On this regard, the French Presidency of the Republic is emphasizing the role played by companies that have contributed to the country’s appeal and competitiveness through their investments and actions. And in this frame the Minister for Territorial Cohesion and Relations with Local Authorities Ms Jacqueline Gourault physically visited on Monday 17 January the industrial site of Chiesi Group in La Chaussée Saint-Victor.

In particular, Chiesi has received the Contribution au Plan de Relance (Contribution to Stimulus Plan) special award, which is part of the program Choose France, promoting France's attractiveness. The award was recognized, as anticipated, thanks to investments to develop low carbon impact dispensers: the plant of the Italian company, which is energy autonomous, contributed and contributes to the resilience of the healthcare system in France, and to job creation also.

The strategic role of Chiesi for French institutions

On her visit, following the postponement of the Choose France summit due to the health situation, the Minister recognized the prize awarded by Chiesi in October at the Etats de la France event. Following the recovery plan, Chiesi Group has chosen to invest even more in France, in a sustainable and long-lasting way. In this context, the ministerial visit represents an additional recognition for Chiesi as a major pharmaceutical player in terms of industrial attractiveness and ecological transition in France. “This special Choose France award underlines the French government’s recognition to Chiesi as a key healthcare industrial actor contributing to health innovation and ecological transition”, said Minister Jacqueline Gourault. “The investment of over 60 million euros is a perfect example of the concrete approach to industrial development within the regions”.

Subsequent investment plans have increased the site’s production capacity, in order to meet the challenges of a growing global demand. Today, with 80% of this production dedicated to export, Chiesi actively contributes to France’s competitiveness and international industrial influence. Through its innovations and ecological commitments, Chiesi has been included in a day of institutional visits for the French government, that marked by the renewed confidence of foreign investors. Chiesi is also among the 17 companies that have distinguished themselves by launching major investment projects in France, and to which the national government has attributed the Choose France awards. Four of these companies are Italian.

Thanks to the latest investment program of more than 60 million euro over the 2019-2024 period in France, as part of the overall Company investment of 350 million euro, by 2025 Chiesi will become a leading producer of Metered-Dose Inhalers (MDIs), while continuing to invest on dry powder inhalers to meet the needs of asthma and chronic obstructive pulmonary disease (COPD) patients.

The La Chaussée Saint-Victor site is also an example of ecological transition, thanks to the high-tech investments made in recent years. These include a plant dedicated to the reprocessing of industrial water, a policy of reprocessing 100% of waste and – in the near future – the installation of photovoltaic panels, in order to reduce the site’s carbon footprint and achieve full energy autonomy. Chiesi’s long-term sustainable decision to invest in the site has revealed to be a winning strategy based on developing industrial projects. By investing massively in its site and choosing the technologies of the future, Chiesi is actively contributing to the strategic autonomy and resilience of the healthcare system of France and Europe. 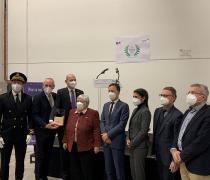 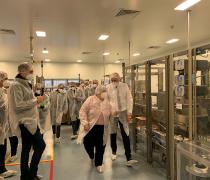 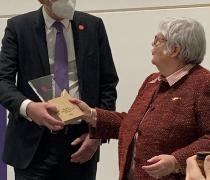 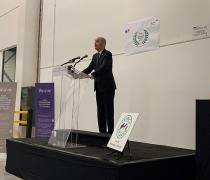